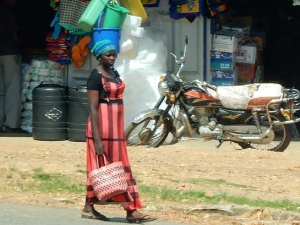 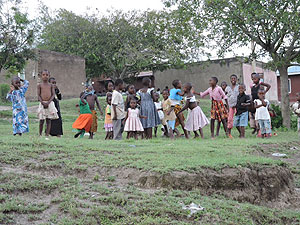 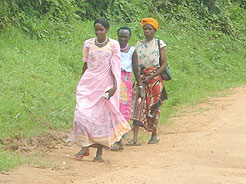 “Connecting Ideas . . . The Power of Questions”

The theme emerging for me as I reflect on our experience in Uganda is, for sure, interdependence.    The reality of connection – not just the connections among humans, or the connection between humans and the rest of the natural world – – – but also the connection of ideas, of projects, of action and consequences – – – this theme keeps playing over and over again for me.

We’ve learned that NGOs are prolific in Uganda – and many that we learned about seem to be providing significant positive impact in terms of health, education and environmental awareness.   And – WOW – do they prompt questions for me.  At the same time – my antenna are also highly tuned to notice creative examples that do seem very systemic.  In other words,  I burn with questions about what does work.  How can communities – and countries improve their life – by their own definition? Is it too late for that already – has TV, movies, music, politicians and missionaries already planted western seeds so extensively that appreciation for traditional culture has faded beyond motivation to preserve?

One organization shared that their work had decreased the death rate from Malaria by 80% in one area  by spraying living units and surrounding bush areas every 9 months.  Thank goodness for those folks who probably would have died if this project had not happened. AND – I wondered, “Do the residents not inhale the fumes from that spray?  Do the children who play in the area come in contact with the residue of the spray?  Is anyone researching the soil and water source to determine whether or not the contents of the spray is entering the drinking water?

Pondering these questions with the Cultural Affairs Officer at the US Embassy, her frank comment was that she didn’t believe any one was doing that or had the authority and resources to do that.  She suggested that donors must take responsibility for the impact of their funding.   Later,  in discussion with our Safari guide, Fred, he raised questions of his own: 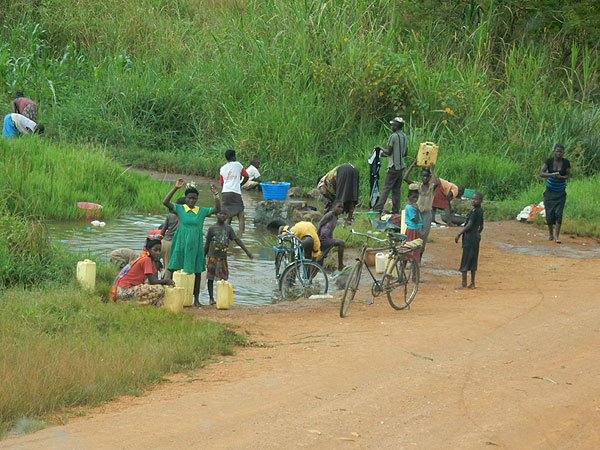 We remembered our visit to Reach Out Mbuya.  This organization, which seems to be doing amazing work with those who are living with HIV/AIDS, had discovered a similar problem.  Their clients who were faithfully taking their antiretrovirals medications were using contaminated drinking water.  This organization demonstrates a systemic / wholistic model of providing their services, continually exploring the impact of actions taken.  When their research revealed the problem of contaminated drinking water, the organization responded by providing what they call Basic Care Kits.  These contain a safe water container, a straining cloth, water purifier, a method for checking the water, mosquito nets and condoms.

Reach Out provides “peer to peer” counseling by engaging (mostly) women who have been able to stabilize their health through medication, education and counseling –  in working with other women who are beginning  that challenging process to learn to live with their disease,  They monitor the children of these individuals and work to help them stay in school while parents are in treatment.  They teach adults vocational skills – for example sewing, tailoring, knitting and crocheting and “market” their work by negotiating contracts with local organizations.  Some of the police uniforms of the Kampala Police Force are made by the Reach Out sewing students.  This provides some income for the people while they are in treatment, as well as marketable skills they can use to sustain themselves when they leave this treatment facility. 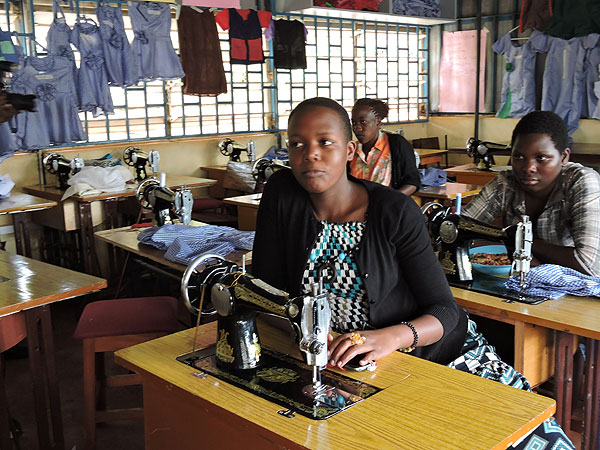 They also have helped a number of groups to form what they call Savings and Loan circles.  These groups manage their own process – electing a leader, a secretary, a treasurer, and three folks who have keys to the box where the funds are kept – all of whom must be present with their keys in order for the box to be opened.   One of the members of this group took out a loan and opened a small restaurant.  When she had paid back that loan, she took out another to buy a cow.     The bank rate for loans is very high in Uganda.  The rates in the Savings and Loan groups is quite a bit less.   And, believe me, they hold one another accountable for repayment! 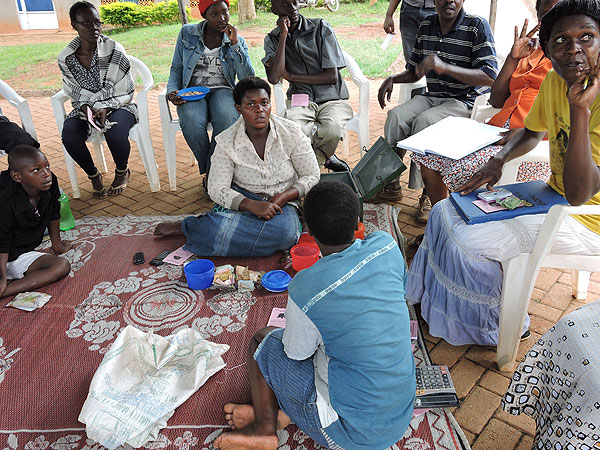 One of my favorite, most useful, question is,  “What is wanting to happen?”  As we embraced our Safari and all we were learning and enjoying regarding the animals and birds, and about the cultures we encountered. . . . . . I felt a bit restless in terms of the purpose of the trip for me.  I wasn’t able to connect directly with any of the women we saw – and awoke one morning asking myself “What is wanting to happen today?”      Whoa!  My experience is that the question usually opens my eyes to what is right before me.   And this day was no exception.

We were tired – our morning had been awesome – connecting with gorillas – in their home!  It was around noon and we had a free afternoon – – an unexpected delight for me! ! !    But – – – our guide said, “If you want to, there s a possibility at 4:00 this afternoon to see some primary school children at the local orphanage dancing and drumming.     Hmmmmm . . . . how I longed for an entire afternoon to sit on the porch and gaze at the magnificence of Bwindi Impenetrable Forest, a chance to reflect on what we’d experienced, to write, to “be.”  However, we could not turn down the opportunity to see the children and learn more about their experience. 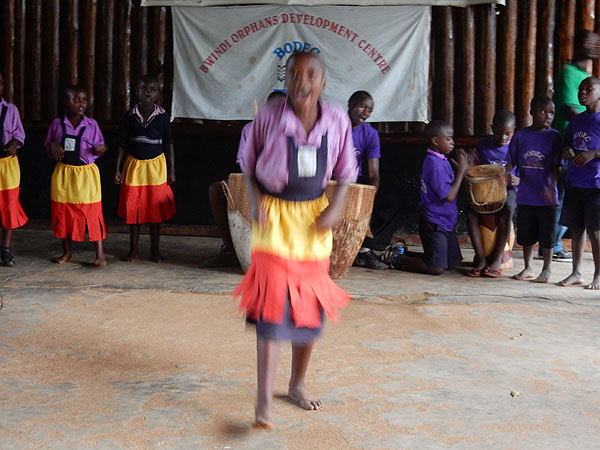 At 4:00 our guide took us to the appointed place.   Oops – an hour early it seems because it is pre-exam time and the students are studying extra long days.  They will assemble at 5:00.  Not to worry – before we’d even learned this we’d wandered into a place that served the Batwa Pygmies and were completely caught up in stories about how these tribes had been cast out of the forest that had been their home for generations – and into a culture about which they knew nothing.  They were nomadic hunter-gatherers, living in shelters they made out of branches – suddenly finding themselves without homes, without food or any way of securing it and in a very strange environment completely foreign to their way of life.

This could be a story in itself, but the gentleman who was describing this work suddenly stopped and called “Barbara!”   I was startled, to say the least, as Barbara is my name.  But a woman stopped and came to the door where we were standing.  As it turned out, Barbara Thomas and her husband (who grew  up in Seattle) were missionaries for the Wycliff Bible Institute, translating the Bible into local languages.   However, Wycliff had “loaned” them – for three  years – to the Kellerman Foundation, an NGO that had established a very good hospital in this village, and Barbara’s work now was writing stories about “what works.”  I think she was seeking out stories behind successes – perhaps that could be used for soliciting funds, and training volunteers.  I was fascinated, of course – my work is seeking out stories of grass-roots women leaders about what worked for them, how they find and step into opportunities for leadership in their communities.

Thus began an intense and stimulating exchange for the two of us.  While I imagine we have very different theological perspectives, we were absolutely united in our search for what “development” means, how communities can become self-sustainable and thrive, based on their own values and desires.  Her gift to me was a recommendation of a book she and her husband were reading, When Helping Hurts.  The authors argue that we are asking the wrong questions.  They propose that all cultures are impoverished in some ways and gifted in some ways – and that rather than focusing on what a culture does not have, we should be exploring with communities what they do have.

Wow!  My own experience is all about how we “can learn from one another – and with one another.”  Here, at the edge of the Impenetrable Forest, I’d encountered a woman brave enough to change the questions she was asking.   She inspired me to return to the “power of questions,” and to assess the kinds of questions I was asking – as I quietly gave thanks for the question that had begun my day,  “What is wanting to happen today?”

The next day we began to make our way back toward Entebbe where we would conclude our visit in Uganda by celebrating with Betty her graduation and receiving her Master’s Degree in International Relations and Diplomacy!  Here was another women who appreciated the value of questions.  Research into how to best communicate information in times of crisis – had revealed that in rural villages that the Mobile Vans with loud speakers that are common – are the preferred process and – not surprising – hearing that information from people they know, and in their common language.  This doesn’t sound like rocket science – – it does, however, sound like practical, elegant, simplicity! 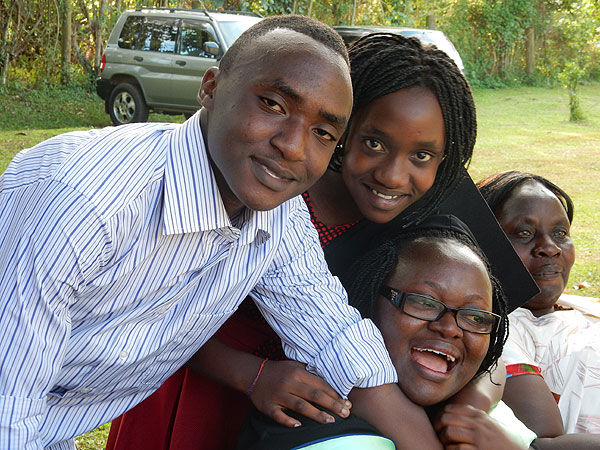