The many faces of Power

As we prepared for moving on to Burkina Faso, our final destination on this incredible journey, it was time to focus once again on the purpose of the trip: 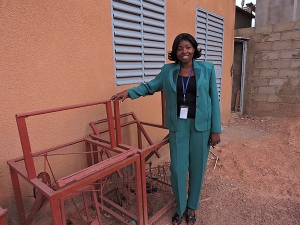 . . . . .to contribute to our world an energy and wisdom that seems most needed at this time in our collective experience – feminine energy and feminine leadership, and – to deepen my relationships with three women whom I have come to know and to love – Claudine, Weub and Betty.

I have to say – it took me while to comprehend the irony of this intention – in contrast to the actual events that confronted us as we arrived in Ouagadougou, the capital of this West African country.  You will see what I mean as this story unfolds.  I invite you to reflect on the many meanings and sources of power.

In the photo above Claudine stands beside weaving looms at the site where she is gradually having a building constructed that will house AProFEn, the NGO she and other professional colleagues founded and which she has been leading since 2004.  She describes her objective in this way, “My intention is to build worldwide active awareness through sustainable projects and programs led by women for women.”

However, it was only on the 8th day after we arrived in Ouagadougou that we had the opportunity to spend much time with Claudine as our arrival in Burkina Faso coincided with a revolution in that country.   This BLOG post will focus on our first 7 days in Burkina Faso.   A following post will share our final day.

On Tuesday, October  28th we arrived in Ouagadougou, the capital of Burkina Faso, about 2:00 in the afternoon. Knowing before we made our decision to proceed with our plans – that there was “political unrest” in the country – in no way prepared us for what we were about to experience.    Claudine met us at the airport and drove us directly to her office at the World Health Organization, explaining that this was the only place where she knew she could provide cold water for us to drink. The streets were deserted.  Government offices, schools and universities were closed for the week, as were banks and most other businesses, large and small.   The Marketplace was empty.   Yes, it was tense, almost like everyone was holding their breath.

The Burkina Faso Parliament was scheduled to vote on Thursday, October 30th, on a Constitutional Amendment initiated by President Blaise Compaore that would enable him to be elected to as many as three more five-year terms.  His claim that he needed time to build strong institutions only angered the people in Burkina Faso, who have seen no improvement in their country during the 27 years Compaore has already been president. Burkina Faso is ranked 181st out of 187th on the United Nations Human Development Index.  http://hdr.undp.org/en/content/table-1-human-development-index-and-its-components

Following a drink of cold water (most welcome) and the opportunity to meet Josephine and Edith, who participated in Claudine’s Conversation in the Developing Women’s Leadership Project, http://www.womenleadingtheway.com/womens-leadership-project.html, Claudine took us to our Guest House.

On Wednesday, despite the tensions, Claudine was able to pick us up and take us for lunch – a chance for  “catch up” conversation and thinking through plans for our time in Burkina Faso,  recognizing that flexibility would be  essential and that forces beyond our control would be playing a big part in our lives during this part of the trip.

On Thursday we were advised by both Claudine and the US State Department, as well as the staff at our Guest House – to “stay put.”  The State Department terminology:  “Shelter in Place.”    Thousands marched in the streets protesting the planned Parliamentary vote scheduled for 10 AM.

One of the other travelers staying at the Guest House, Christopher, a videographer from the University of Rome, was in Ouagadougou to document a conference on African Innovations in Agriculture.  The conference was cancelled.  He was there.  He had a press pass.   So at 5:00 on Thursday morning he, and a local professional with whom he contracted went out to see, and record, what was going on in the city.

Around noon they returned, Christopher was quite shaken.  Some protesters had insisted he take his camera and be at the front of the march, which was not what he wanted to do – and did not do.  As he reviewed his videos, however – and shared them with those of us at the Guest House – he settled and continued to go out each morning for several days. One protester he interviewed explained that Compaore had been president ever since he was born and was only interested in expanding his own power, not in helping to address the high prices, low wages, lack of jobs and persistent poverty in their country.  The young man (60% of the population of this country is under 25 years of age.) said, “I am a father.”  We need a new leader.  I do not want to leave this problem to my son’s generation to solve.”    Thousands and thousands of citizens marched to demonstrate their commitment to a change –  a different kind of power.

The picture below, from an article by Penelope Starr, author for UN Dispatch,  reveals the magnitude  of the protest. 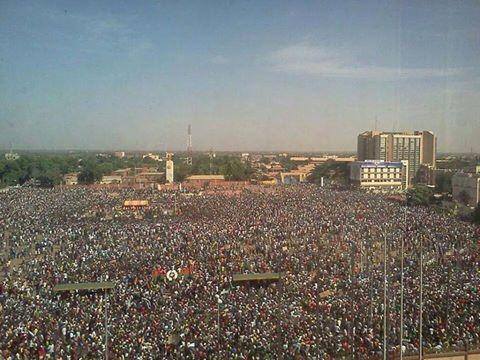 Determined to stop the Parliamentary vote, protesters burned the Parliament Building, a hotel where Parliament members were staying, the national assembly building, cars, tires, and other targeted locations.

On Saturday – Claudine, and her daughter, Djamila, came to our Guest House, and, with Djamila driving, took us out to see some parts of the city.  It was relatively quiet, though the damage from Thursday was evident.  We hoped by the next day we could go to the village in Bouslin where Claudine and her colleagues work with the local women providing training on sanitation, health, and economic matters. 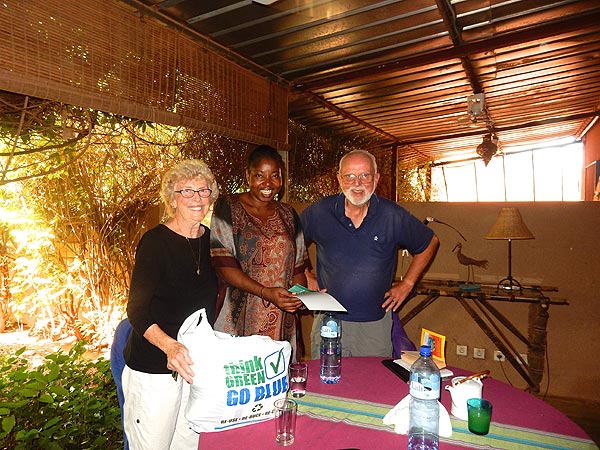 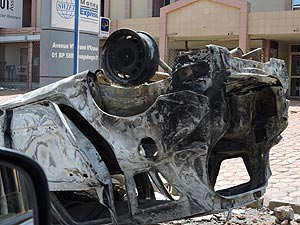 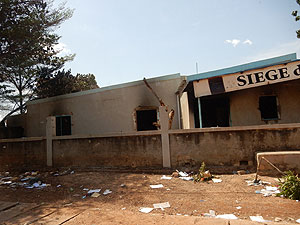 However, by Sunday – the question of who would take over the government of this country prompted chaos and more rallies, At one point both a former leader of the Opposition and the former Defense Minister turned up at the state broadcasting headquarters, separately- each to announce that s/he would head the transition government.  Shortly after they arrived, gunfire broke out and both the staff and protesters ran away.  Because there were also rallies at other cities outside of the capital, it was not safe for us to go to the village of Boulsin.  This was a major disappointment for me as Claudine and I had hoped to explore the possibility that women in this village could learn from Alaffia how they formed a Cooperative in Togo.  The folks in that Cooperative provide shea butter that is used by Alaffia in producing a variety of cosmetics in their plant in Olympia.  Though more challenging to do this using email and SKYPE rather than face-to-face, we will continue to examine this possibility.  “Shelter in Place” remained the instructions of the day.

Monday – Jim and I ventured out to visit the Artisan center.  This delightful place houses a vast variety of African crafts – such as metal work, baskets, woven scarves, leather –  with the artists doing their work on site.     Though the curfew had been changed to 10:00 PM – 6:00 AM, the airport remained closed. Turkish Airlines cancelled our flight – – no word to us, the travelers.  Other airlines changed their flights from night arrivals and departures to mid day – because of the curfew.   Turkish Airlines did not.  I will avoid this airline in the future.  We found them completely unresponsive, basically leaving us stranded in Burkina Faso.  A week after we had returned to Seattle, Turkish Airline flights to Burkina Faso were still cancelled.    Jim was able to get a ticket from Ouagadougou to Addis Ababa and then on to Istanbul, Los Angeles and Seattle. 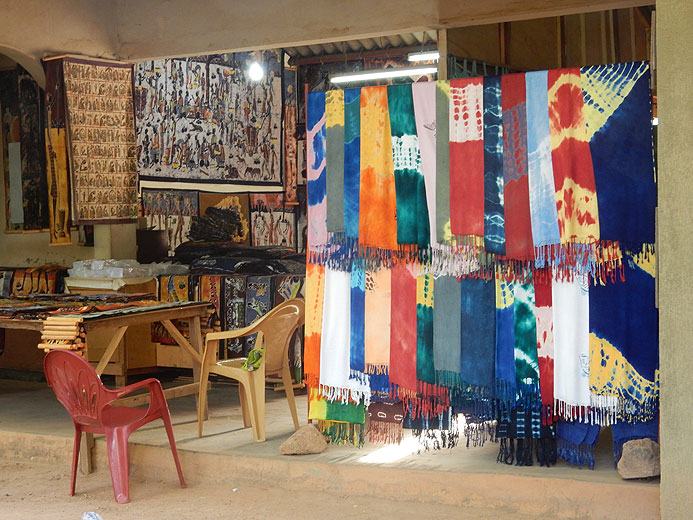 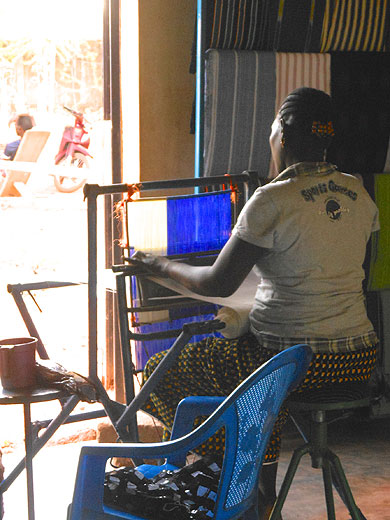 Tuesday was a busy and very meaningful day.  We consolidated many of the activities Claudine had planned for ten days – into this one day:  lunch with Edith and Josephine who were part of the Conversation, and Frankline, a recognized young African leader who Claudine was chosen to mentor, a visit with the Cultural Affairs Officer at the US Embassy, a visit to the future home of AProFEn and a visit to Claudine’s home where we had the pleasure of meeting the rest of her family

Wednesday we left for airport around 9:30 – to begin our long (40 hours from the time we left Burkina Faso until we arrived in Seattle) and, thankfully uneventful trip home.

Look for more about Tuesday’s events and a story of real leadership, and a different form of power, on the next BLOG post.