There are times when larger groups need to engage together.  Most cultures have traditional ways of doing this.  In Western cultures,  these traditional ways have been very formal and hierarchical, where communication has often been one-way, from those with the most power to those with less power.  In the past few decades, however, new strategies have emerged that allow all parts of an organization or a community to be heard and to participate in decision-making.  I call them Social Technologies.  Two of those are described here. 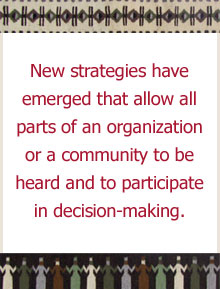 Appreciative Inquiry (AI) is a systematic way for a group or organization to discover its strengths and its real energy for realizing its potential. The process was developed by David Cooperrider of Case Western Reserve University (http://appreciativeinquiry.case.edu) and the basic idea is to focus on what works, rather than trying to fix what’s wrong.  The approach acknowledges the contribution of individuals, in order to increase trust and organizational alignment.  It helps groups create meaning by drawing from their own stories of concrete successes.  The method also teaches a particular way of asking questions and envisioning the future that reveals areas of shared positive energy in a group or organization.

A message on the Appreciative Inquiry List serve, May 24, 2009, from Malcolm J. Odell, Jr., MS, PhD, Sudan BRIDGE Consultant, describes this process in action, in a village in Sudan.  Appreciative Planning and Action (APA) is an adaptation of Appreciative Inquiry  (AI).  Excerpts from his message follow.  The full text of his message may be found at:
http://mailman.business.utah.edu:8080/pipermail/ailist/2009-May/009714.html

I woke up about 5:30 am the other morning in a UN Peace Keepers camp and suddenly things seemed remarkably clear.  What I’ve been seeing as I watch my Sudanese Winrock colleagues conducting Appreciative Planning and Action (APA) community mobilization meetings in local villages, is really quite a miracle…

Within just a few hours the community – including about 100 villagers (majority women I might note) went through our streamlined APA process built almost exclusively on pictures they drew in groups that started with sharing their success stories about things they have done together in the village on their own that they are particularly proud of.  They went on to draw their vision for what they’d like to see their village to be for their children and grandchildren. 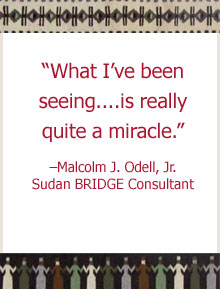 Following this, they outlined their priority projects they would like to undertake themselves, choosing one for which they made a detailed action plan accompanied by personal commitments.

Then I watched, admittedly with my jaw dropping, as each group took about 10 to 15 minutes to actually start to implement the first step of their plans. Women climbed up on the roof of the local mud-brick school they have started building and began thatching the roof; youth cleared an area for a vegetable garden; old men – including the Chief himself – began dragging thorn branches to fence the garden area.

This process, complete with some lengthy speeches by a local councilman, the chief and others, plus active presentations by each of the groups — three women’s groups, the youth, and the elders — where they shared their APA inspired success maps, dream pictures, action plans, personal commitments, and what they had done to begin — took less than 3 hours, beginning to end.  Several other groups have done the same in 2 hrs, or even less.

Example: one of the women’s groups showed their three action plans for vegetable, fish, and milk collection projects and how they would divide responsibilities, collect the revenues, and put them in a special box which would be watched over by 3 women; a fourth woman said she would take responsibility for settling any disputes that might arise to ensure everything went smoothly.  No where did the women ask for anything from Winrock or any other donor.  These, they proudly reminded everyone, were projects they would do entirely on their own.  One women’s group even reported that their commitment was to support the government of the new Southern Sudan by paying taxes! (Have you ever heard that before, anywhere?)”

Odell’s very detailed description of an application of this Social Technology not only provides the practical, results-oriented nature of these technologies, it also demonstrates their value cross-culturally.

For more information about Appreciative Inquiry, you can access their web site:  http://appreciativeinquiry.case.edu/ 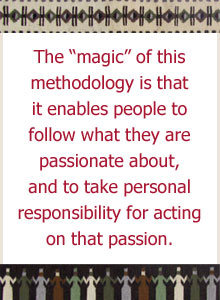 Open Space is a methodology that engages large groups of people in determining both what needs to be done and how it can be done.  It is especially useful as a way of organizing a meeting where the topic or issues are complex, where participants have diverse interests and perspectives, and where innovative and actionable outcomes are needed.  Participants identify specific issues on a given topic, self-select into conversation groups where they work with others who have a special interest in that issue, and determine personal commitments for action.  The “magic” of this methodology is that it enables people to follow what they are passionate about, and to take personal responsibility for acting on that passion.

This is how the process works:

Example of a one day meeting:

Additional information about using this technology for a meeting may be found at the Open Space web site:
http://www.openspaceworld.org/

These are only two of many Social Technologies for facilitating productive large group deliberations.  See Diverse Thinking – Harmonious Action, in the Articles and Essays section for additional examples.  What strategies have you used for drawing out the wisdom and coordinated action of a large group of people?