April 2011: There Is Always Room for One More Chair at the Table

How would you feel about your family expanding from YOU, to you and four teen-age daughters? This is Gail’s story! Enjoy and be inspired by her love, creativity and fortitude.

As we begin to deeply comprehend that leaders are not defined by position, we understand that a leader is someone who sees a need and is willing to take some initiative, some action, to address that need. What need could be greater than a fourteen year old girl with no parents to care for her?  Well, maybe four teen girls who need a Mom.

Gail lived a very full life. She had carved out a meaningful professional career, fulfilling volunteer work , and rich and satisfying relationships with friends and family – when she met Jenni. Gail was volunteering at a non-profit fund-raising event and Jenni, a young volunteer, was working along side of her when they first met.

Jenni’s mother had died of cancer when she was 13. Before she died she had connected Jenni with the Big Sisters organization and a strong relationship had developed between Jenni and the woman volunteer who was her “Big Sister.” When this Big Sister moved out of state, Gail and a friend, decided they would be happy to become “Big Sisters” to Jenni. However, at about the same time, Jenni’s Foster Home situation became untenable. Her case worker’s struggle to find another suitable Foster family was not successful, and with prayerful contemplation and four days of training over a two week period, Gail, became, not a “Big Sister,” but a Foster Mom.

Of course a lengthy application process had to be completed which included home visits and approval by representatives of the Washington State Department of Social and Health Services, but in a very short time Gail’s life as a “Single” had changed to a life as a “Single Mom.”

While most women have about nine months to get used to the idea of being a parent, Gail had only a few weeks. In fact her colleagues at work teased her saying, “When most women tell us that they are going to have another child it is about nine months before that child arrives, but when you tell us that, by the next week you have a new child in your family!” 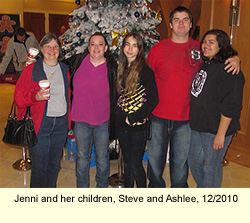 Jenni lived with Gail for about a year before she moved out to live with friends, but the
relationship continued, continues to this day, nurtured through frequent visits, family vacations
and the love and compassion Gail and Jenni developed for one another. Jenni is married
now with a family of her own and Gail is still Mom, and Grandma as well.

Shortly after Jenni moved out, Brooke arrived on the scene. Her parents were simply unable to care for her and sister, Molly. In fact, Molly, a year and a half older than Brooke, had, since the age of 4, often been left in charge of her younger sister, sometimes with no food available in the house. Eventually they came to live with their maternal grandmother and aunt. 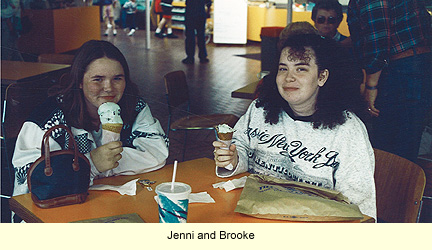 Within a few weeks of Brooke’s arrival, her best friend, Melissa, was the next “daughter” to be welcomed into the family. Though she continued to live with her parents, she was largely “invisible” to them at that time, so she lived at her home during the week, but spent weekends, holidays and vacation times at Gail’s. One of the gifts of this relationship for Melissa is that she gradually re-established a very strong and positive relationship with her biological parents. Currently she and her biological mother are the primary support for her father as he copes with leukemia. 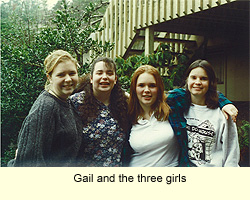 Within six months Molly, who was at this time in the Foster Care system, joined her sister,
Brooke, and Melissa. When Gail took Molly
to register for school the principal assured her
that they would receive her records from other schools she had attended. “All of them?” Molly
wanted to know. At 14 she had already attended 24 different schools.

Within a two year period, Gail had become “Mom” to four teen age daughters. The girls’ experience before coming to Gail had created some powerful patterns that often did not serve them well. When faced with a choice, Brooke’s response to Gail was “You decide for me.” But with persistence and patience she gradually began to take responsibility for her self and to make her own decisions. Molly, on the other hand, experienced both the intense desire “to just be a kid,” and a conflicting sense of responsibility that made it challenging for her to let go and let Gail be the parent. Melissa reached out for Gail’s help and support to access personal counseling to work through issues she had experienced at an earlier age.

Gail’s basic philosophy seemed to serve her well in her unexpected role of Mom. She honors the best in each person, including herself. She understands and appreciates the interdependence of life itself. And she knows that in giving one receives.

Some of her “golden rules” may be useful to all Moms and Dads. Here are her top three:

Gail demonstrates leadership that has had the profound outcome of enabling four girls, who experienced very chaotic and troubling childhood times, to mature into young women who can be proud of who they are, and who are now contributing to the world through their own lives.

As this photo of a recent family event vividly illustrates, one woman can have a profound impact. The ripples of Gail’s love and intention have been amplified by the young women whom she brought into her home and into her life.