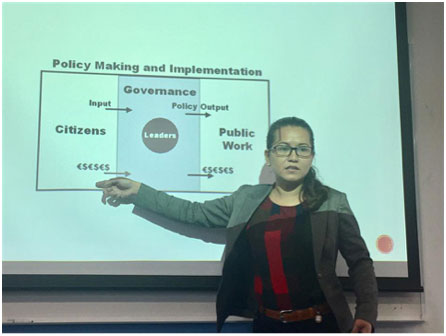 Our Story this month highlights a valuable feminine strategy for leading.  Tam Nguyen demonstrates insight, creativity and perseverance that are characteristic of this strategy.   The story of how she developed these skills and this mindset may surprise you.

While forecasting, projecting and goal setting are common approaches to leading, they require control for moving to the goal, and do not easily flex to accommodate changing situations.  Women, on the other hand, perhaps because they have more often led from the “foot of the table” rather than the “head of the table,” are often very skilled at leading depending on their insight, creativity and perseverance.  These skills are necessary for leading effectively in our rapidly changing global society.

Tam’s leadership journey vividly reflects this strategy.  Friends have jokingly described her as not understanding the word “No.”   Because, to Tam “No” simply means, “Let’s look at another way to accomplish this.”

Born in the Ben Tre Province in the Mekong River Delta Region of South Vietnam, Tam, grew up amid the revolutionary spirit and “power of the people” characteristic of this region.  She was nurtured on stories of heroic persons who contributed their lives to serve people and their country in the struggle for unification of the country.  As she sat in the back of the classroom and listened to her professor Father’s lectures, she absorbed the importance of his role in training local leaders.  As she observed her Mom, a former journalist during the war, she was challenged to go beyond conventional paths and stretch herself as she pursued her own life’s path.

Both her father and her mother provided models of leadership, quite different models, actually.  And from these examples, and the revolutionary spirit vibrating in her country as she was growing up, Tam crafted her own unique way of leading.  It would have been easy to be caught up in the powerful political passions of the day and the expectations of “how one leads.”   But Tam seemed to be able to live in that space between what had been and what was going to emerge and forge her own path.  She seemed to know the importance of being exposed to different ways of thinking.  This theme can be seen throughout her development as a person and a leader.

She describes her generation as the first to experience a peaceful period  following thousands of years of colonization and wars.  This generation was highly motivated to honor the sacrifices that had led to this peaceful time and sought to develop their country in ways that ensured the continuation of the liberty they experienced.

Persistence, patience, dedication, hard work in her school brought recognition to Tam, opportunities to express her ideas and ideals before large audiences.  She demonstrated early her focus on practical application of those ideas and ideals and on the power of taking initiative to put new ideas to work.   Her Master’s thesis received the highest score for the initiative it proposed in decentralizing education, because it could be adopted as a practice in the educational management system.

Volunteering in various youth projects, Tam surrounded herself with youth leaders and expanded her world view as she participated in programs aimed at strengthening mutual understanding between Japan and Southeast Asian countries.  This powerful experience of connecting to the “outside “ world at a young age had a profound impact on Tam.  Recognizing that peace is built on trust and respect, and that friendship can exist across boundaries, allowed her to let go of fear and anxiety.

As she continued her education, two choices Tam made seem most significant in establishing her own adult path.   One of those was taking the initiative to learn from mentors.  Not waiting for mentors to come to her, she looked for those leaders whom she admired, observed their behavior, and reflected on lessons she wanted to integrate in her own leadership. 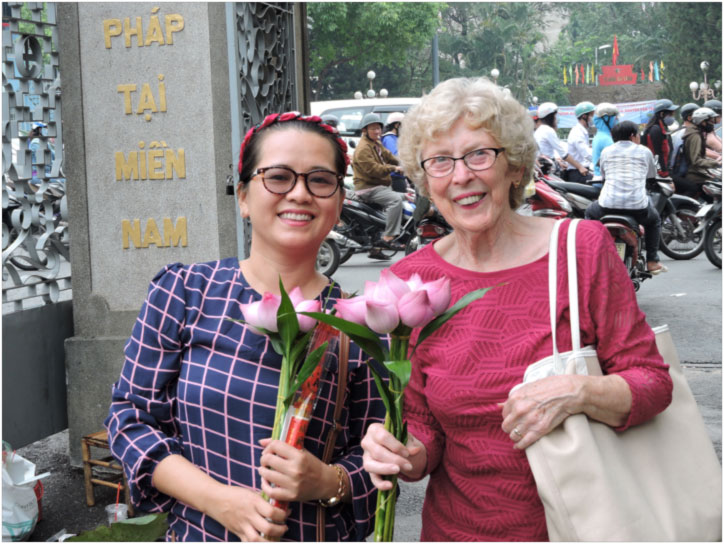 Tam builds  meaningful and mutually beneficial
relationships based on trust and respect.  Here she
and her friend and mentor, Barbara Spraker, visit a
Temple near Tam’s home in Saigon.

The other choice was stepping up to risk.  As an instructor and head of the Department of English and Computers at Ben Tre College for Politics, she was in line for promotions.  However, she left a stable job, accepting risks in her personal life and an uncertain future, to accept additional education as part of the Humphrey Program in the United States.  Tam chose to expand her own world view and to be able to bring to her students perspectives of globalization that would expand their world view as well, and, that would inform their leadership in the development of their country. 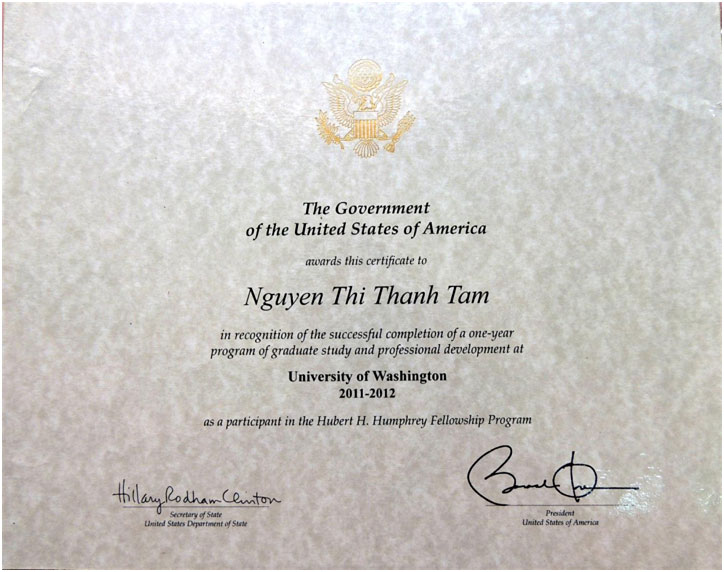 Tam’s Certification signed by President Obama in 2012
is a symbol to her
of the rich learning of that year. Not only was she living in a culture different
from her own, but for that entire year she learned with and from a group of
young leaders from many cultures!

Tam understands that leaders are learners ~ and that learning opportunities surround us.  We only need to be open to seeing them and open to being vulnerable ~  to step into unknown situations.  While in the United States, she engaged in a Project to Develop Women’s Leadership, sharing her valuable perspective as a citizen of another country, and learning from young leaders like herself from other countries – Uganda, Guatemala, Burkina Faso, the U.S., Ethiopia, Nicaragua. 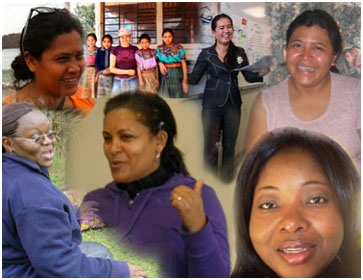 Returning to Vietnam following her experience in the United States, Tam wanted to work in public administration reform.  How to enter that arena?  “I caught a chance,” Tam says!  Well, yes, she “caught a chance.”  A world of leadership skills and strategies are reflected here.  She was noticing what country leaders were thinking, paying attention to how they wanted to approach reform, recognizing that they wanted to use the ISO 9001 system which was popular in business for increasing effectiveness.   She was also, again, willing to risk.  She wasn’t waiting to be invited; she took initiative.   She “danced with opportunities that presented themselves” by applying to the Ministry of Science and Technology to get the ISO 9001consulting license. Only 200 such consultants are licensed in the entire country of Vietnam.  With this certification, she was able to work with more than 100 communal committees to apply the ISO 9001 in their operation. 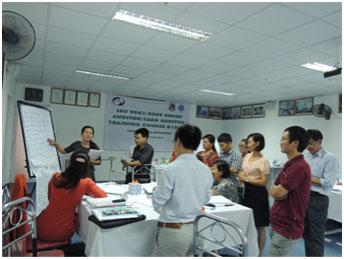 This experience led to an invitation from the Indian Ministry of Foreign Affairs to participate in in a program of exchanging ideas about administrative reform and project management.  Continuing to develop her own strength as a leader, Tam most recently applied and was accepted for an Award from the Australian government to pursue her Ph.D. 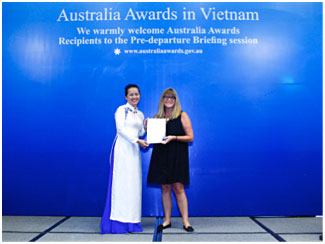 Tam and her family are currently living in Nelson Place, Williamstown, Australia, where Tam is studying in the Department of Management in the Monash Business School, Monash University. 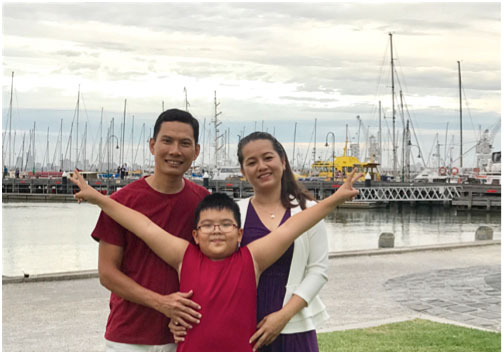 As she learns from what others have studied, and prepares to conduct her own research, Tam continues to demonstrate her belief that learning is meant to be put to practical use.   She will continue to lead by adjusting, adapting, and “dancing with changing circumstances.”   These skills will now be exercised based on a foundation of extensive knowledge.  She will be modeling the leadership skills and strategies required In our rapidly changing global society. and, in doing so, demonstrating leadership gifts that women bring to the global community.