July 2014: Rozine ~ a Leader in Social and Economic Change

What do leaders do?

In this case, the leader developed improved rice seed!

When the Program Manager, of a Malagasy Non-Governmental Organization, began visiting various sites where they provided support for local economic development, she recognized that the farmers’ community in Mahavoky Sud, a remote village in Southeastern region of Madagascar, was making dramatic progress – more than any other communities involved in their project. After inquiring, she discovered that a woman was leading a “Group of Improved Rice Seeds Producers.” How does she end up leading such a group within a very patriarchal community? The following is Rozine’s story. As with most other exceptional Malagasy people, and it is closely tied to rice production. 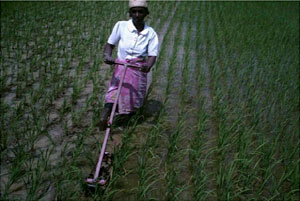 Rozine is weeding more than one acre of her field where she tested a local variety to produce paddy seed.

Rice is the staple food and the main food crop being planted across rural areas of Madagascar, likewise in Rozine’s village. Hybrid seeds that are recently introduced lose their characteristics after two years of replantation even though these seeds had very promising yields.  Sensitive to this limitation, Rozine began her own experimentation from selecting the best of her own paddy, and trying this out with improved techniques and a new period of plantation. She has come out with an improved rice seed from a local variety of paddy. Rozine is particularly known as being among the leaders who promote rice seed certification in her very remote village. We have to emphasize that certification includes government oversight through each sensitive step, from soil specification to post-harvest storage. These Certified Seeds are not only being used for the local community, they are also sold at a higher price than regular rice.

Rozine is an observing and curious person; she has acknowledged that the traditional season of rice plantation becomes the period of cyclones and flooding. Therefore, a shift is needed, but traditional patterns and cultural norms are challenging to change. Rozine paved the way with few others: planting in July-August and harvesting in November-December, just right before the critical period.  She urged her fellows to “just try”.  Rozine’s village is currently among the highest producers of rice in this area and their warehouse is kept full year around.  A new harvest fulfills it every time they sell out.

Rozine vividly illustrates that leaders are always learning. She has done the same experiment with growing yams instead of  gathering them in the bush as usual.  By this  method of production, yams are now available for the farmers’ families when rice fields need labors the most, providing a supplementary source of nutrition for the locals.

While these accomplishments seem to be about food production, a modification in gender roles has also occurred along with the economic changes. Indeed, rice production had always been “man’s decision” in rural areas and likewise in her village. However, Rozine wanted to participate in such decisions and demonstrated from her practices that she is able to work in the rice fields by doing hard work usually reserved for men.

Is this a good achievement?  As many cultures have experienced, when women begin to move into work that has long been considered “man’s work,” this often means that they only add new layers of work for themselves. In Rozine’s part of the world, local men began to be interested and participate in what had traditionally been considered women’s works such as vegetable gardening, nursery planting, and so forth. There is a new balancing of the work between women and men. Women are actually empowered in income allocation decision-making reaching a level they would never have had a year before: having a choice of where to store the harvest, where and to whom to sell it and what personal and family items to purchase. 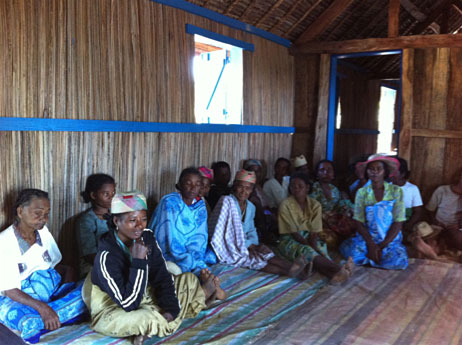 Rozine is the middle woman (wearing a blue “lamba”, a traditional woman’s upper-skirt). She’s encouraging her peers to speak up, as she backs up.

Now, women show up clean, well dressed, and more comfortable sharing their opinions and engaging in community dialogue, unlike women in other villages that continue to struggle. Certainly, this happens because she is a woman who stands firm with her knowledge and experiments, and the results have brought her high respect. Therefore, by holding this role, she is opening up, for both men and women, expectations of how women contribute to their community, the value they provide. 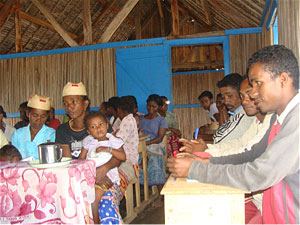 Rozine is the one holding her grand-daughter. In front of her is a big cup of freshly brewed coffee she served as soon as a visitor’s cup is empty.