The title of our Story of the Month morphed from “Follow Your Bliss ~ (as Part of a Larger Whole.”) a Joseph Campbell phrase, that captures the emphasis on individual accomplishment which many in the U.S. embrace, to “Feed the Happy ~ (as Part of a Larger Whole.”) This title emerged because our Story of the Month features a woman who leads in a way that brilliantly conveys the beauty and necessity of both of these realities. The inner work of knowing one self, and knowing what truly brings you JOY, activates one’s best talents and contributions to the larger whole. It is the link between individual and community. Thank you, Tracie! 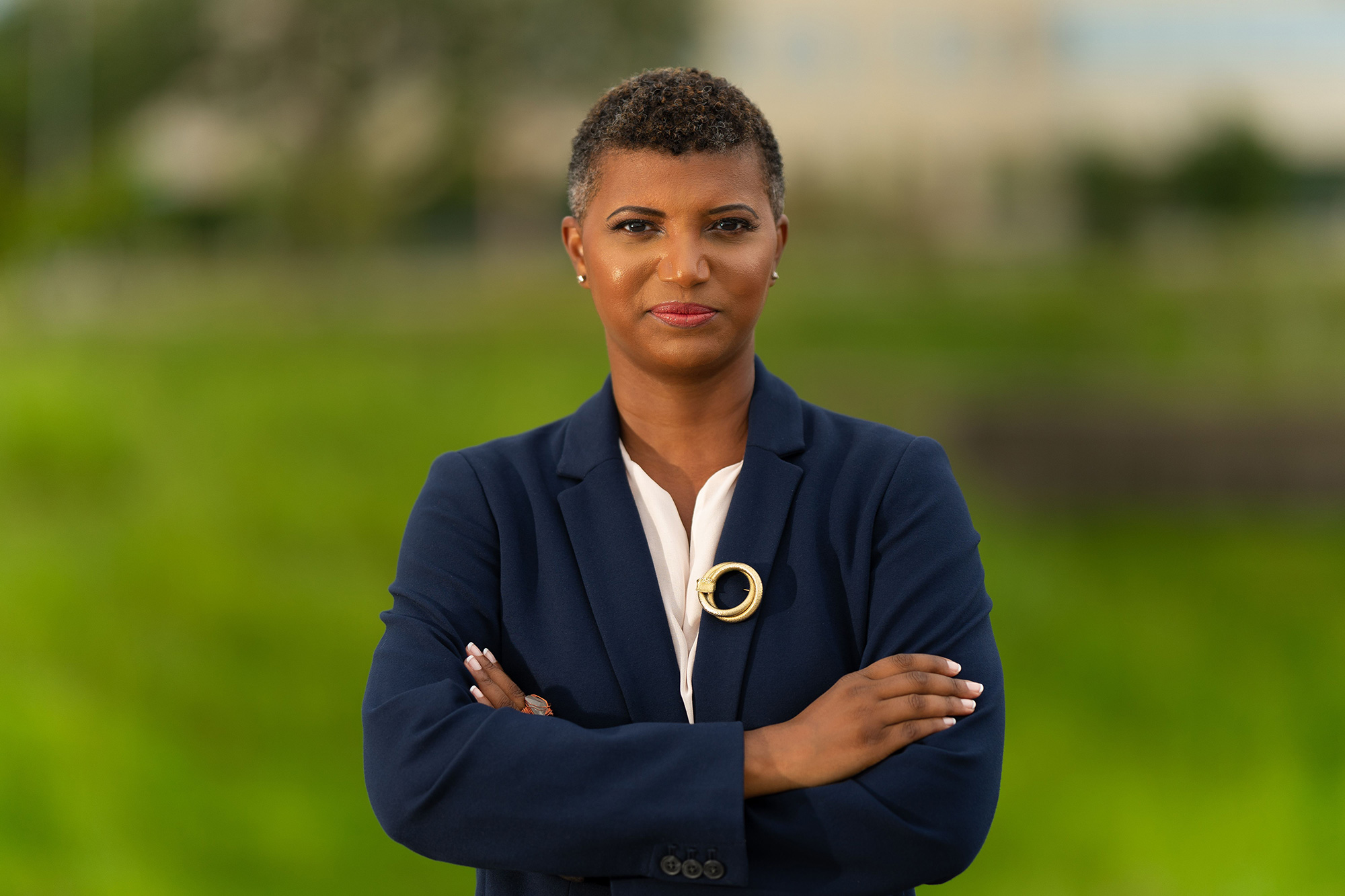 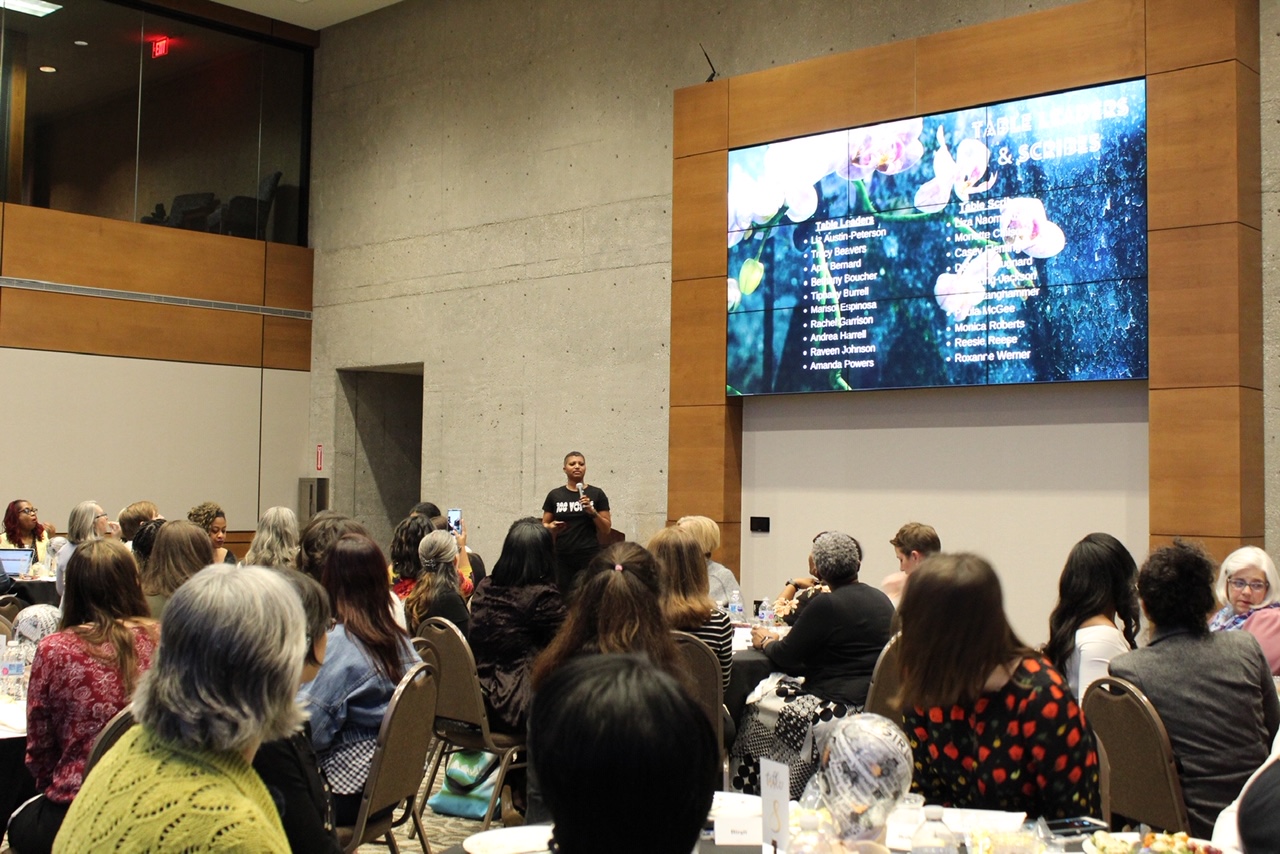 The first 100 Voices event – held in person in Houston (prior to pandemic restrictions on public gatherings). 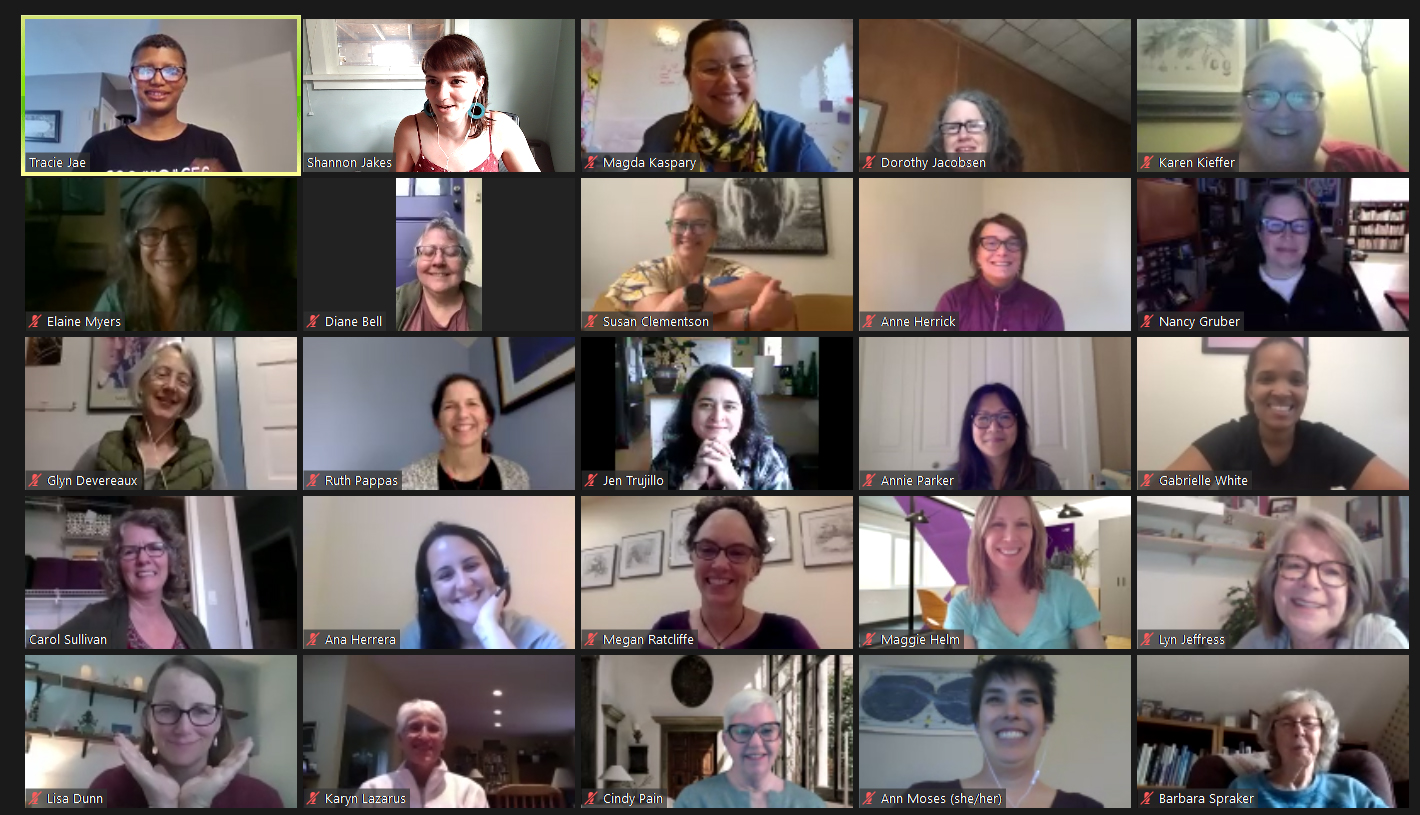 Referred to as “the Quiet Rebel,” Tracie designed, and carries this project forward ~ a virtual gathering that provides a safe space for a “difficult conversation.” It is not about argument, convincing, or consensus. It is about mutual respect and understanding. It is about reflection and intention. It is about appreciating differences, hearing and honoring one another’s lived experience, listening and learning with grace.

Tracie grew up in Houston, Texas. She is mother of three grown-ish daughters and has earned a BA degree in Business Management and an MA in Strategic Communication and Leadership.

“My parents were products of the Civil Rights movement,” she explains, and they “sheltered my sister and me, providing a safe, middle-class home in a middle-class neighborhood.” Through fourth grade, Tracie attended a Black Catholic School. Her classmates, her teachers and her neighbors all looked like her. Tracie comments that she considered being black as special. 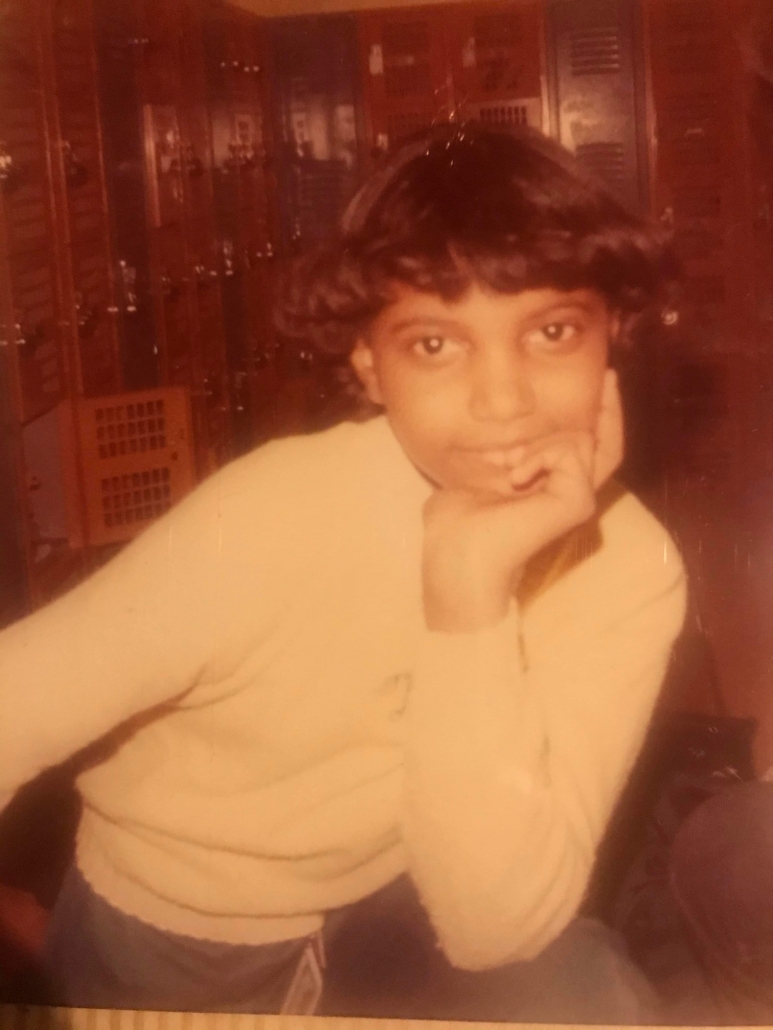 In spite of her “sheltered” childhood, however, gradually things began to change. When Tracie was in 4th grade, she watched the movie Roots for the first time. She described this as the first time she really experienced “bone deep” anger, the kind that “just takes over your whole body.” In the 5th grade she had her first white teacher. In 6th grade her “best friend” invited her for a sleepover. When the friend’s mother learned Tracie was black, she cancelled those plans. And in 7th grade, a student-teacher offered as a class assignment the “pros and cons of slavery,” an incomprehensible subject.

Throughout Middle School and High School the student populations Tracie experienced were quite diverse. Her Middle School fed into a High School that was located in a part of Houston that was traditionally white, and rich and she was bussed to this magnet high school. Though there were the usual “groupings” of “jocks,” “nerds,” etc. there were clear groups of “white jocks,” and “black jocks,” “white nerds” and ”black nerds.” Black students organized groups that mimicked those already established and quietly understood as being reserved for white students. Tracie recalls, those who looked alike grouped together. And the friendships at school were friends at school. There were no phone calls, no sleepovers. There were simply “friends at school.” By the time Tracie was a senior in high school, however, she and some others founded S.T.E.P (Students To End Prejudice), an organization that lasted several years after the founders graduated. In all of this, Tracie describes student attitude as “It’s just the way it is.” She has fond memories and good friendships from that period.

Tracie describes herself as one who frequently changes her mind, and has held several jobs. In describing why this happened, she acknowledged that sometimes it begins with an inner drive that she wants to “do” a specific thing, and at other times it may be prompted by awareness of an external reality. However, she specifically noted that when there is an overlap of the “inner” and “outer” that makes the change seem obvious.

Recognizing early in her life that she had both interest and skill in writing, Tracie cites this as an example of her experience of learning to honor her own center.

I tried out a variety of traditional ways that folks used writing ~ focusing on Journalism when I began my undergraduate study; later, writing a novel. However, now as I pay attention to my inner guidance, I find avenues of using my writing in ways I choose, and in ways that at the same time, meet other people’s needs.

Referring to the fact that she has been married twice and divorced twice, she refers to both of these relationships as opportunities for birth. From the first, she had three daughters, and from the second, she birthed herself. “When I was out of the relationship, I could see myself more clearly. I could see how much I had altered myself to be a part of the relationship. I felt free and had no need to ‘tone myself down,’ and not take up so much space.” 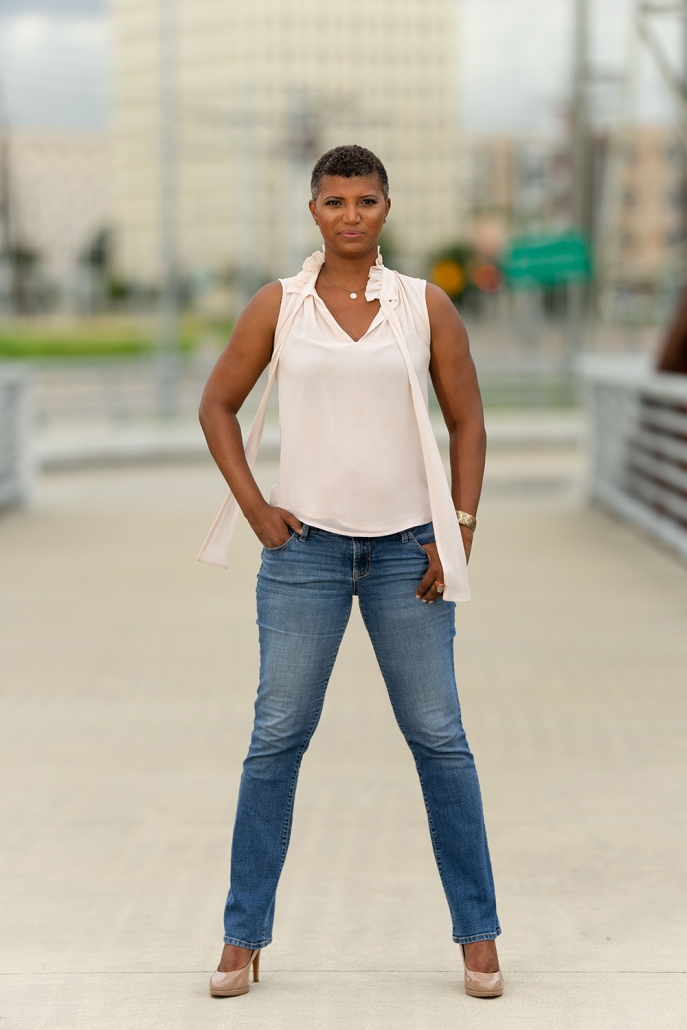 Owning her own strength 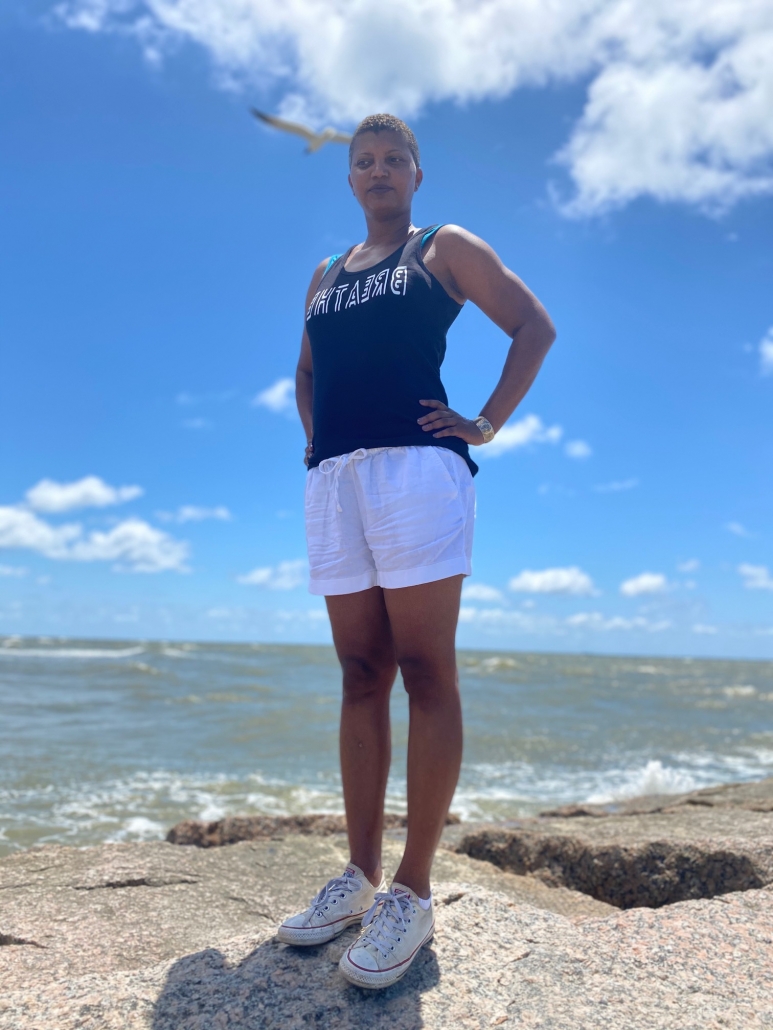 Her t-shirt says Breathe (in reverse) – a reminder when she sees her reflection to “focus on her breath.”

In reflecting on her life, Tracie comments that she feels like she has lived 6 lives, though another perspective could be that she has explored 6 variations on a theme. That theme would be “communication.” She has long been aware that she has a keen skill for articulating her thoughts so that others both understand them and can apply them for their own purposes. It also seems clear that she understands “communication” as “give and take, “ talking and listening, seeking to understand one another. 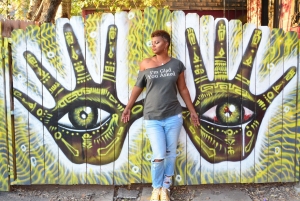 In one of her business ventures, (2017) she designed a question-based card game: I’m Glad You Asked. The game is non-competitive, designed to create conversation and community. Tracie demonstrates practical compassion as she continually weaves her skills and passion with the needs of the community.

Tracie speaks of women’s leadership as being sourced from the “depth of our soul.” It is more “wisdom” than “knowledge.” “I think this deep inner knowing has always been there; now I pay attention.” Decision-making from this place is like developing a new muscle. With strong intention “I took time to be alone, to be still, to be quiet and listen to this deep inner voice. I’ve learned that it is much like any muscle, the more you use it and develop it, the easier it is to access. It is like it does the work on its own.”

Her current endeavor reflects the manifestation of her own inner work. She creates space where women can come together virtually and really hear one another’s experiences. She intentionally avoids centering anyone’s story. Instead, she creates a space where we center everyone’s stories. “We’ve done enough ‘shame and blame,’” she says. We need to simply hear one another’s experience. She offers this acronym as guidance for listening: LOVE

Tracie Jae believes that we can have a better world if we focus on human to human interactions and is doing what she can to contribute.