Each month we highlight the story of one woman who is making a difference in the world.  We invite you to celebrate these women, learn from and be inspired by their stories. We also invite you to share your story of women leading the way, so that we might in turn share it here.
VISIT OUR STORY ARCHIVE >>

September 2019: Leading in a Global Community 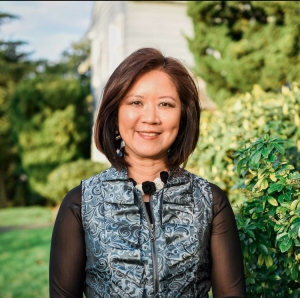 Our Story for September 2019 features Ming-Ming Tung-Edelman. In an era when migration is unprecedented, her story brings a powerful message.

While some seek to stop immigration, it is happening!  The UN Refugee Agency, in their Global Trends Report, indicate that “Every minute in 2018, 25 people were forced to flee.”   https://www.unhcr.orcateg/globaltrends2018/    And the International Office for Migration, now a UN Agency, estimates that there were 244 million migrants in 2015 (see PDF).

Immigrants and Refugees ~ and those already living in areas where the migrants   begin their new lives – are tangible evidence that we ARE a “GLOBAL COMMUNITY” – whether or not that is what we might have chosen.  In the view of this web site, the focus now becomes, Integration.  THIS is our current challenge.  A common understanding of the word, integrate, is:  “to put together parts or elements and combine them into a whole.”  We are more familiar with the concept of Assimilation, which is usually interpreted as “to take in – information, ideas, culture – and understand fully.  Besides migration, since commerce is global in scope and communication enables interaction with folks all over the world, it is most likely that our future as a species, and as a planet, will depend on how we navigate this reality.  The excitement of Integration is that we get to be a part of creating a new whole!

Ming-Ming’s story provides a “real life” experience and one positive way she addresses engaging the differences refugees, immigrants  and “locals” (ones who have lived in the place all their lives, or who have lived there longer than those newly arrived, in a way that benefits all. 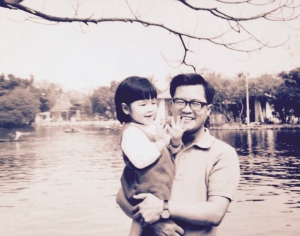 Ming-Ming was born in Taiwan and grew up there, absorbing the culture in which she was embedded.

But, when she was 14 she and her mother, sister and brother joined her Father, one of three engineers who had been sent by the Taiwanese government to Saudi Arabia. 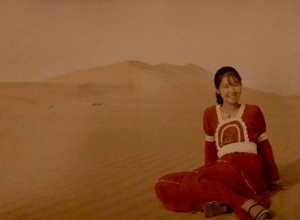 At the International School in Riyadh her classmates were from all over the world.  This experience “opened up my views,” she reports, and caused me to be more curious about other people’s  views and experiences.  After two years in this diverse learning environment however, when Ming-Ming was ready for high school, her family moved to San Luis Obispo, California, USA, where there were “few people who looked like me” she notes,  and most of my classmates “had known each other most of their lives.”

Her adjustment continued, as she learned English and Spanish at the same  time in order to apply to universities, and chose to attend the University of California at San Diego, CA.  Here she felt more comfortable, and more confidant.   The student body was more racially diverse and the curriculum was challenging.  At UC San Diego she completed her BS in Biology with a minor in Art, and five years later earned her doctor of pharmacy degree.

Ming-Ming has an unusual combination of strengths.   She loves science and loves working directly with people.   She combined these in her professional work as a pharmacist.  Also, she loves art and fashion, and in 2015 completed a Certificate in Fashion at the University of Washington.  She describes this point in her life as the time when she combined her compassion and passion.   It is here that Ming-Ming’s creativity as a heart-felt leader becomes apparent.

Eight years ago she founded the Seattle Chapter of the Chinese American Citizens Alliance and was been president of this local chapter until May, 2019. In 2017 she founded the Refugee Artisan Initiative , non-profit which has grown from her passion “to help refugee and immigrant women in the United States build a better life for their families.”  In describing each of these organizations, Ming-Ming stresses the role of a mentor who cared about her and supported her growth.  She has led from her own passion, and utilized her own experience.   This is how she describes it:

My concern for refugees began with my own experience.  I was an immigrant from Taiwan myself 34 years ago.  I was able to get an education , become a pharmacist, and give my kids a great life. As recent crises around the world have brought more refugees to our shores, I wanted to do something to give back and find a way to help these new arrivals achieve financial independence.

The essence of the work of RAI is training immigrant women in home based jewelry making and sewing custom items for its own and other companies under their brand (small batch sewing manufacturing.) 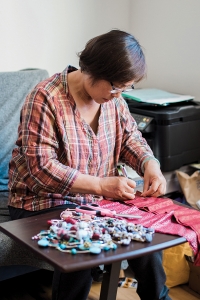 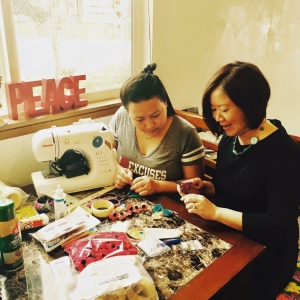 RAI provides the tools and machines as micro-loan and the training.  Here are the Eco-friendly and Fair Trade Principles that guide their work:

Both the Chinese American Citizen’s Alliance  and the Refugee Artisans Initiative  (RAI)  are indeed ways of INTEGRATING into a new society.  It is important to maintain elements of one’s heritage.    AND   It is important to learn to be a part of – and contribute to – one’s new home country.  There will be conflicts, of course, but these can be areas of growth for all of us as we  continue learning HOW to  BE  a GLOBAL COMMUNITY.

Ming-Ming has this message for women:

“Be BOLD and not afraid to start something new.

When you have a desire, take an action!

(You are already winning by doing so!)”